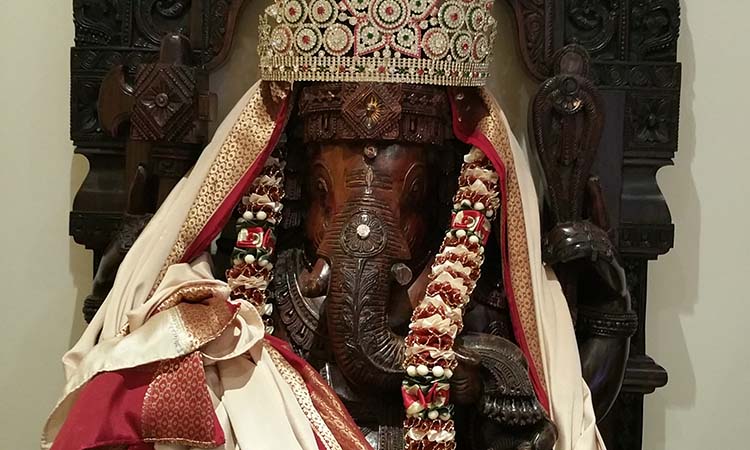 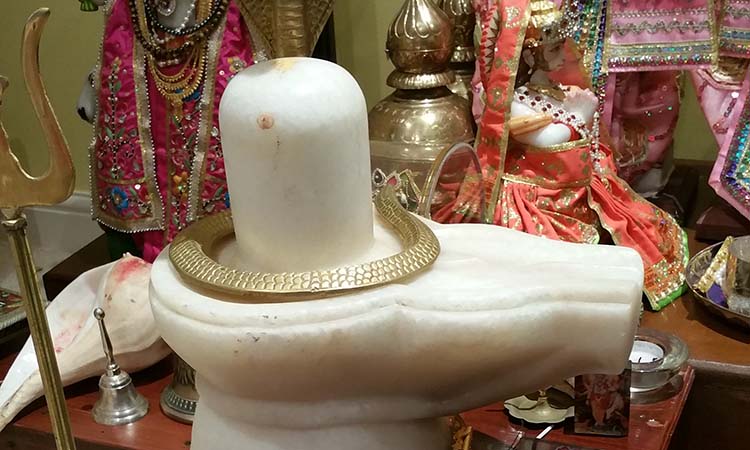 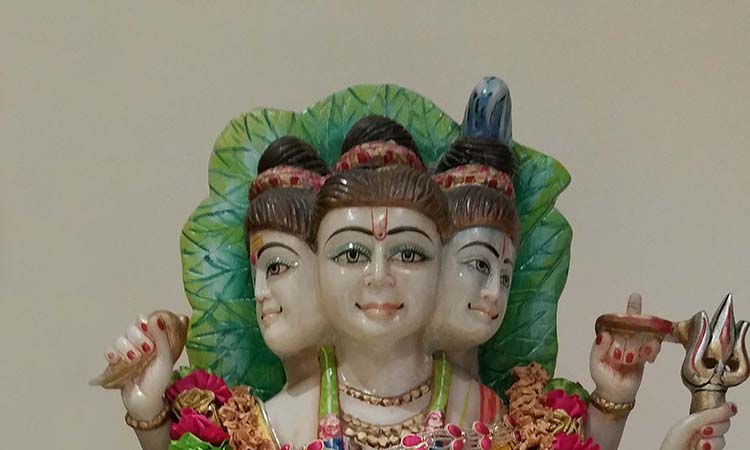 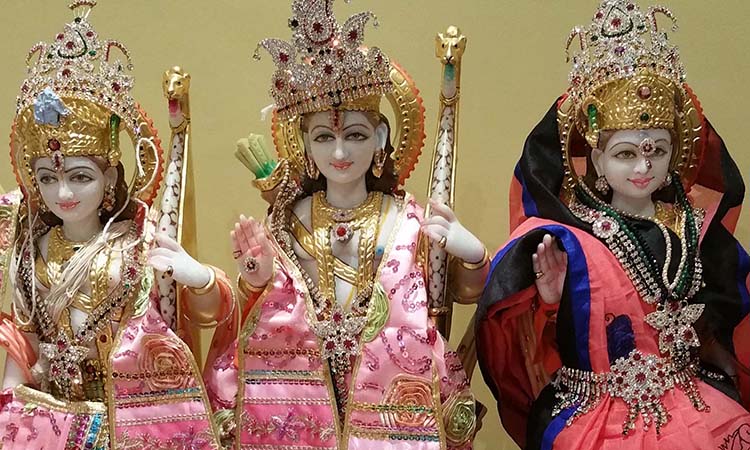 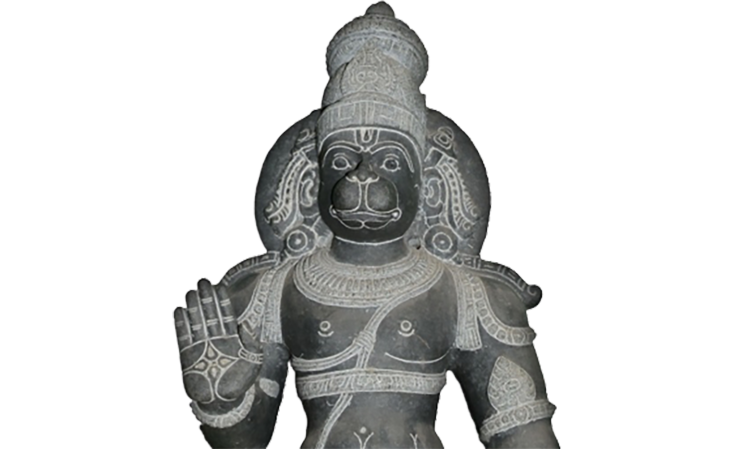 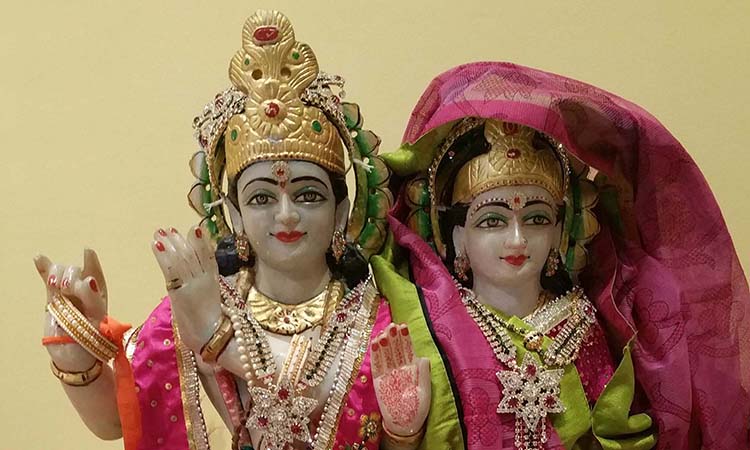 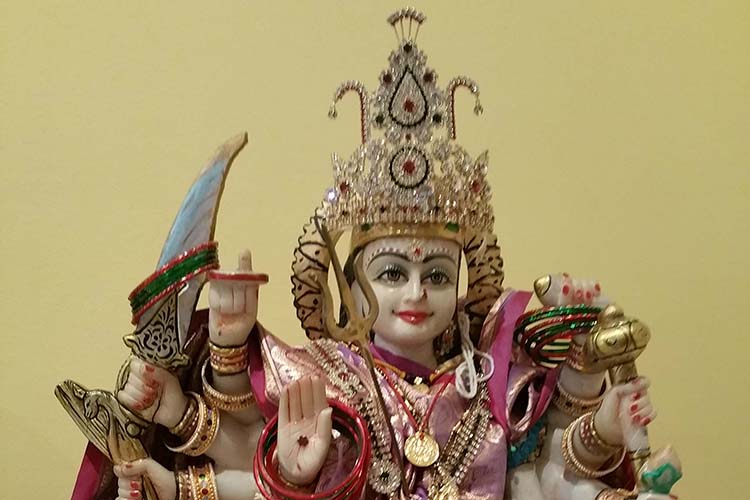 Gana means group and Isha means leader. Among Hindus, no undertaking is carried out without first offering prayers to Ganesha. He is known as lord of obstacles as he removes obstacles and confers blessings on the aspirant. He vanquishes the enemies of spiritual seekers and shows them the right path, Dharma. The popular form of Ganapati is red in colour with elephant head. He has big belly representing cosmos, one tusk, the broken one used either as war weapon or writing tool!. He has big willow ears, a good listeners and ready to grant boon to devotees, and small feet representing slow but sure path to enlightenment. His tiny eyes represents attention to fine details and total focus on 'Brahman'.  The trunk represents control of ego and wavering mind. He has four hands two of which shows holding pasa (noose), Ankusa (goad). The other two shows Abhaya mudra (Protection/fearlessness hand gesture) and Varada mudra (wish full filling hand gesture). He wears sacred threadSerpent around belly represents victory over evil and one beyond death. Little mouse at his feet represents control over greed and compassion to all creatures. He loves grass (Durva) , that shows relevance of everything in the cosmos. He wrote Mahabharata supporting Veda Vyas, scholar of many spiritual books and knower of Vedas, the origin of literature. He has two wives symbolical representation of Riddhi (Wealth) and Siddhi (Success).  Ganapati represents Vedantic dictum, Tat Tvam Asi ‘ That Thou Art’.

Aum Ekadantayai Vidmahe   - I know Ganapati,
Vakratundaya Dhimahi   - I meditate on Ganapati,
Tanno Danti Prachodayat   - May Ganapati have grace on me

Shiva is the third supreme god head in Hindu Trinity. Shiva is worshipped in the form of an idol and as well as without form as a Lingam (elliptical sphere). The consort of Shiva is Gowri or Shakti. Ganesha and Kartikeya Swami are known as his two children. He is accompanied by Nandi representing devotion of a true devotee. Shiva is often called Rudra in his cosmic destruction form.  Literally, Shiva is one in whom the universe sleeps after destruction and before the next cycle of creation by Brahma and sustenance by Vishnu.  Shiva means auspiciousness and linga means symbol.  Shiva Lingam represents supreme god head. Linga represents cosmos. All cosmic bodies are represented by Shiva lingam. At any given time you can only see one side of cosmic bodies such as stars, planets.  Shiva lingam has three parts. The hidden part is Brahmabhaga (lowest square part) and Vishnu bhaga (octagonal part). The visible cylindrical part is Shivabhaga. Prayers are offered to visible part.

The popular image of Shiva shows him as handsome and youth of fair complexion. His body is besmeared with ashes. He is portrayed with three eyes representing Sun, Moon and the third eye between eyebrows representing annihilation of ignorance. He has four arms, two holding Trishula (Trident) & Damaru (Drum).  He shows Abhaya mudra (Protection/fearlessness hand gesture) and Varada mudra (wish full filling hand gesture). He has long matted hair, crescent moon as diadem and river Ganga flows from head. He wears tiger skin and an elephant skin as garments. He wears serpents as necklace, girdle, sacred thread (Yagyopavitam)and bracelets. He may wear garland of skulls (Mundamala) around his bue neck.

He may be depicted surrounded by Nandi, the bull, as his mount, Bhringi, the sage (Rishi) with three legs and three arms, The mouse of Ganesha, the peacock of Kartikeya Swami, host of ghosts as attendants, goblins, imps as his retinue. He resides in Himalayas on mount Kailasha but more commonly found in cremation grounds!

The name Dattatreya is composed of two words - "Datta" (meaning given) and "Atreya", referring to the sage Atri, his physical father.  He is known to mankind as the Adi-Guru ('First' Teacher) and is recognised as the Lord of Yoga and supreme teacher of knowledge of the Absolute Truth (Ekam Sat).  He is well versed in all Vedas and is the author of the Tripura Rahasya given to Parashurama.

Rama is one of the incarnations of God and teaches us how to lead a righteous life by setting examples. He shows that every human being should have strength, tenderness, firm resolution and mental capacity to sacrifice material pleasure, ego and jealousy. The word Rama comes from the Sanskrit word "Raumya" meaning "beautiful". Rama, blesses devotees with protection, compassion and commitment to righteousness.  His brother Lakshmana and His consort Seeta --who also represents Lakshmi -- and Hanumana, accompany Rama.

Lakshmana personifies brotherly love and demonstrates how to remain modest/humility. He represents the ideal qualities of a younger brother. He symbolizes the ideal of sacrifice. He leaves his young wife behind in the palace and chooses to accompany his brother (Rama) in exile. He sacrifices the amenities of his personal life to serve his elder brother, Rama.

Seeta symbolizes an ideal daughter, wife, mother, and queen. Whereas Rama symbolizes standards of perfection that can be conceived in all the facets for men, Seeta represents all that is great and noble in womanhood. She is revered as an incarnation of Lakshmi, the divine consort of Vishnu.

Hanuman is the perfect follower, disciple of Sri Ram.  Hanuman is a perfect guru to man kind to guide how to merge into the supreme lord.  Where ever Sri Ram resides there Hanuman will be present faithfully serving.  Hanuman popularly known as monkey god has many names. Three names are very popular namely Hanuman, Anjaneya and Maruti.  Hanu means upper jaw is swollen. Its other meaning is knowledge. Hanuman means one who has divine knowledge who destroys ignorance.  Hanuman is also incarnate of lord Shiva, latter is known as destroyer of ignorance, sins & obstacles.  The name Anjaneya is taken from the mother of Hanuman, Anjanadevi.  Anjana in Sanskrit means affection and love.  The name Maruti is taken from the father who is called Vayu (Wind God).  In Sanskrit, 'Marut' means air.  Hence Hanuman is named Maruti, son of Vayu. Ma also means auspicious & ryti means sound. Maruti also means one who recites AUM. Maruti destroys our ego & sorrow.

To learn about Hanuman, devotees are encouraged to read Tulsi Ramayana and Valmiki Ramayana. In current times of technology and social media, P.P. Sri Ganapati Sachchidananda Swamiji has pledge of reciting Hanuman Chalisa billions of time. Hanuman Chalisa written by saint Tulsidas and has 40 stanzes glorifying the greatness, devotion and faith of Guru Hanuman.  Hanuman sets example for one and all as to how to serve master with true devotion and faith.  Lord Hanuman is present in all four yugas namely Krita, Treta, Dwapara and Kaliyuga. He is immortal and always eager to serve Sri Ram and help devotees find peace and reach the abode and merge with the lord, Sri Ram.

Radha was the eternal consort of Krishna. On the left of Sri Krishna is Shrimati Radha.  Radha means Dhara, the flow of devotion.  Radha was considered to be the perfect devotee. Those who wish to come close to Krishna must cultivate the devotional qualities of Radha.  Radha Krishna resides in Golak, the supreme heaven.

Krishna means darkness. Lord that guides us from darkness to light is Krishna. Krishna has many names and P.P. Sri Swamiji has summarised some of the popular names of Krishna in his devotional songs (Kirtana) such as Krishnam Vishnum Sridharam Madhavam Madhhusudanam Govindam.

Krishna is the supreme god head and is the 8th incarnation of lord Vishnu on Earth. In Bhagavat Geeta, supreme lord promises that whenever there is decline in spirituality and when mankind is in difficulty, lord incarnates on earth to rescue the civilization. Krishna incarnation is to destroy evil and evil practises and teach mankind to follow path of righteousness (Dharma). Bhagavat Gita the doctrine and teachings of Krishna must be read by all true aspirants to achieve the higher abode and merge in god and become one.

Hindu philosophy based on Vedanta depicts energy in the form of Mother Nature (Amba) or Durga Mata.  There are many names that represent "Energy".  In vedic religion, mother worship is very popular among Hindus.  Durga the most powerful and ferocious is a popular image of "Mata" is described in Devi bhagavata, (holy book describing glory of mother), Durgasatasati, 700 stanzes glorifying virtues and valour of mother.

The trinity in Hindu religion represented by Brahma, Vishnu and Shiva has as their consorts Savitri, Laxmi and Parvati respectively.  In vedic religion, mother worship is very popular among Hindus.